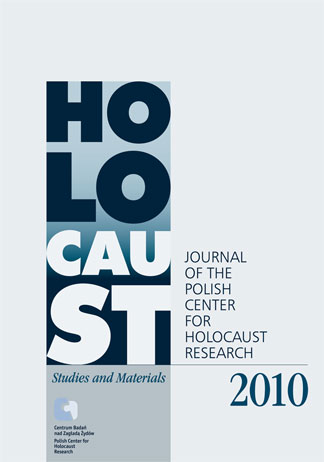 The present issue of “Holocaust. Studies and Materials” continues the tradition which started with the publication of our first volume, two years ago. The articles and studies presented in the current volume represent a selection of materials which appeared in volumes 4, 5 and 6 of the Polish edition of “Zagłada Żydów. Studia i Materiały” – the sole Polish-language revue entirely devoted to Holocaust issues.

We open with two studies by Dariusz Libionka. The first one concerns the issue of help offered to Jews by Poles. This is, quite likely, the most controversial issue in contemporary Jewish-Polish relations, and a theme that is constantly debated in the media. Libionka offers the first comprehensive and well-informed overview of the “help” discussion, starting with early post-war writings, through the miserable post-1968 studies deeply tainted by the anti-Semitic campaigns, and going all the way to recent years, when historians working under the aegis of the IPN (Institute of National Remembrance) set out to document the alleged war-time sympathy of the Poles toward their Jewish co-citizens. Libionka’s second essay touches on an equally delicate theme – the war-time actions and inactions of the Polish Catholic hierarchy. Did the Church do enough? Did the bishops, cardinals and the primate hear the pleas of the dying Jews? What was their reaction, when faced with this unprecedented tragedy? These, and other questions, are discussed by the author, who has recourse to various previously unknown documents taken from the Polish archives. Marcin Zaremba describes one of the most spectacular – if we may use this expression – phenomena of occupied Poland: the all-encompassing “szaber,” or smuggling, which by 1945 had become a way of life for large segments of Polish society. Barbara Engelking brings to light one of the most important diaries written by a Jewess in hiding. Fela Fischbein’s diary (long overdue for publication) is a powerful, moving account of one woman’s resilience, resourcefulness, temerity and boundless courage in the face of horrible odds. Using Fela’s experiences, Engelking sets out to show the complex, unpredictable, and often treacherous relationships between Jews in hiding and their Aryan hosts. Aleksandra Ubertowska leaves the Polish scene, and writes about the universal problem of representation and misrepresentation of the Holocaust in literature. The remaining essays, materials and research texts have one thing in common: they bring to light little known (or unknown) historical and literary evidence. They also include several unique and new testimonies which complete the volume. The texts are in part based on recently uncovered archival sources, and in part on new approaches which help us to redefine our field of study. It is our hope that this volume will further underline the crucial role of continuing Holocaust-related research. It is equally important, however, that this book shows clearly that there is no understanding of Polish history without understanding the history of the destruction of the Polish Jews.