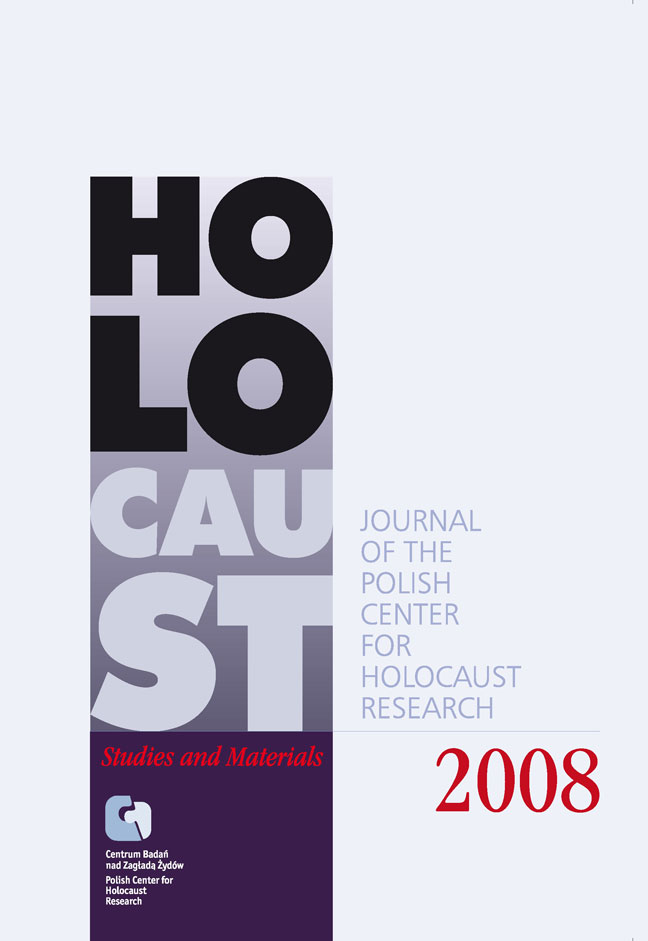 Writing about the history of the Holocaust in Poland, and in Polish, carries with it a very peculiar set of duties, obligations and challenges.  There are few issues in Polish history that reverberate through the nation with such a force and whose ongoing discussion is able to have an immediate and profound impact on the national self-perception. The recent discussions surrounding the publication of Jan T. Gross’ books are a convincing proof thereof.  On the other hand, the issues related to the destruction of the Polish Jewry have been among the most forgotten, falsified and manipulated events of the recent past.  As discussed in recent decades, the Holocaust became an addition, rather than an essential and defining part of the Polish historical writing. And these were the reasons why the Polish Center for Holocaust Research has been created in the first place   The members of the Center set out to bring back the history of the Holocaust into the center of the historical focus while, at the same time, trying to make it an integral and inalienable part of mainstream Polish history.

The publication of this volume marks an important chapter in the history of the Polish Center for Holocaust research. Since its creation in 2003, the Center has published a number of books written by its members. It has also published translations of crucial foreign publications previously unavailable in Polish.  In addition to the published books, the Center has also published three volumes of its yearly revue The Holocaust Studies and Materials. Fourth volume is soon going to press, and will be available in the bookstores in the near future.   Each volume has a thematic leitmotiv : an area of study which has previously been neglected by researchers. The first volume focused on methodological issues related to the history of the Holocaust. The authors analyzed the historical and epistemological potential of the available sources, while pointing to the pitfalls and challenges in the existing literature. The second volume shed light on the various aspects of the phenomenon of collaboration under the occupation; both on the “Aryan” and on the Jewish side. The third volume turned its attention to the fate of the smaller ghettos, places often overlooked in the academic writings. The fourth, current, volume sets out to explore one of the most hotly debated and most contentious questions in the area of Polish-Jewish studies; namely the problem of Polish-Jewish interaction and, more specifically the issue of helping and rescuing the Jews during the Holocaust in Poland.  This English-language volume represents a choice of articles published in the first three issues of the Polish version of the Holocaust Studies.